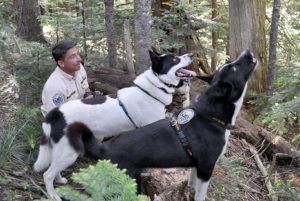 Over the past 20 years, I have been asked tens of thousands of times why human-bear conflicts occur. The answer isn’t because bears are troublemakers, or bear populations are out of control, or because they enjoy being around people. And while a poor year for natural food source production often results in increased sightings, there is a much simpler explanation. Bears come into conflict with people because we give them a reason to. We attract them with the endless supply of high-calorie food sources we intentionally or unintentionally provide.

If blame needs to be assigned, don’t blame a bear for having an unmatched sense of smell, or for taking advantage of an available food source that will help it or its family survive, or even for outsmarting people. Blame the source of the attractant; it’s not the bear that’s being a nuisance. Merriam-Webster defines an attractive nuisance as: something on one’s property that poses a risk to children or others who may be attracted to it. It’s all those things that people seldom think about, from garbage to bird feeders to fruit trees, that can be deadly attractants to bears.

Working with bears is an incredibly rewarding profession, but it is not without its non-biological challenges. It does include research, ecology, biology, and trying to build responsible data-driven management plans. But it also involves mastering politics, economics, sociology, recreation and conflict resolution. And most of all, it requires working with people, from homeowners and communities to politicians and land developers and just about everyone who lives or works or visits or has any interests in areas where bears are present. The cast of characters is always changing. That’s why we all get asked the same questions and deal with the same problems hundreds of thousands of times.

I often say that educating people about human-bear conflict prevention is the heart disease of wildlife management. We all know that to live a healthy lifestyle and avoid heart disease we need to eat well and exercise. But all too often it takes a heart attack before someone finally changes their behavior and does what it takes to prevent any more problems. The same is true with human-bear conflicts. Most people know that bears will eagerly take advantage of any food sources people provide, but instead of removing attractants, people look the other way until one of those bear visits results in property damage or even injury. Bears are really smart, and tend to repeat successful behavior. So waiting to report a problem and remove the attractant(s) makes it much more challenging to do what it takes to prevent additional conflicts. That’s why so much of wildlife management is actually people management.

When Linda asked me to be a part of this book, I accepted her invitation without hesitation. Why? Because in my work I try my best to always operate under the rule that I can be part of the problem or be part of the solution; I know this book follows the latter. I always thought the original version of Living With Bears was well done, and it quickly became my go-to book. I left it on my desk and would frequently use it as a reference when people called or the media needed quick and to-the-point advice. I also took it to public education events I was involved with and recommended it to people interested in learning more about human-bear conflict.

In this revised edition, Linda has once again spent an enormous amount of time researching the scientific literature, establishing and maintaining dialogue with respected bear biologists across North America, and distilling an incredible amount of information down to the most pertinent educational, actionable messages for anyone interested in being part of the real solution of stopping the cycle of human-bear conflict. Besides all that, it’s a fun read.

This second edition of Living With Bears has been completely reorganized and updated, and I think it makes it an even more useful book. I’m proud to be a part of it; it will prominently occupy that go-to space on my desk, on top of the stack.

As the human population increases and bear habitat becomes more constricted, human-bear conflicts will likely become more common until people make a concerted effort to change. If you appreciate bears in any way, I hope you will read this book, put it to use, and share it with your family and friends; heck, spread the word on social media if you can, because the solution to this epidemic lies within.

I look forward to the day the trend reverses and human-bear conflicts decrease every year, rather than the opposite. Then, I won’t have to continue to watch animals I respect so greatly be needlessly killed because of their intelligence and resourcefulness; that’s not why I got into this profession.

Ultimately, the essential and lasting solutions won’t come from management agencies, they will come from people. If you apply yourself and work with others to prevent human-bear conflicts, I know you can make a difference and I know you can affect change, for people and for bears.